In the music domain, Isabelle Peretz has been a strong proponent of the paradigm of the single-case study. She believes that the examination of individuals who were neurologically intact prior to cerebral insult can reveal the degree to which a given site of brain activity is responsible for specific cognitive functions (Peretz, 1996; Peretz, Blood, Penhune, & Zatorre, 2001; Peretz & Kolinsky, 1993). Peretz's argument begins by asserting the independence of music and language modules (Peretz & Coltheart, 2003). As the evolutionary tendency of the central nervous system is toward the assignment of task-oriented neural subsets (Simon, 1967), Peretz argues that physiological sub-specialisations for music and language would result in greater efficiency (Liegeois-Chauvel, Peretz, Babai, Laguitton, & Chauvel, 1998). She extends this argument by postulating the existence of cognitive modules or specialised mechanisms for subcomponents of musical functions for similar reasons (Peretz & Coltheart, 2003). Peretz's model of music function proposes a hierarchical, modular organisation with different pathways for pitch, temporal and musically-related phonological information through to higher functions that govern music recognition and interpretation. This is illustrated in Figure 1.1. 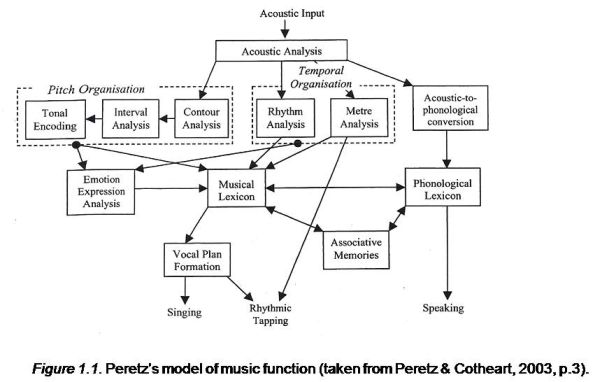 Challenges to the Peretz's Modular Approach

A more recent theory is that different types of information may be represented in distributed connectionist networks (Bullinaria, 2003; Plaut, 2003). Zatorre and colleagues have proposed the idea that functional specialisations for music may recruit neural networks that rely on shared processes (Zatorre & Binder, 2000; Zatorre, Evans, & Meyer, 1994; Zatorre, Evans, Meyer, & Gjedde, 1992). As the perception, encoding, and reproduction of musical sounds requires neural mechanisms that are at least as complex as those for speech, Zatorre has argued that some of these aspects of auditory information processing may be shared with music (Zatorre, 2001). Alternatively, the underlying cognitive processes may be common for music and speech minus certain special components, or with some components being utilised more for music processes and others more for speech processes (Chater, 2003).