Like MANOVAs, Discriminant Function analysis is used to compare groups, like the two sexes, on more than one numerical variable at the same time, such as IQ and wage. Nevertheless, discriminant function analysis can provide more information, but is usually applied only when you want to examine one independent variable at a time. This article does assume some knowlege of MANOVA.

To illustrate discriminant function analysis, consider a researcher who wants to determine whether or not the values and objectives of footballers vary across the four codes: AFL, rugby league, rugby union, and soccer. Each individual rates the extent to which they value the money, influence, enjoyment, variety, mateship, and networking that emerges from football. An extract of the data is presented below. In this instance, 1 denotes AFL, 2 denotes league, 3 denotes union, and 4 denotes soccer. 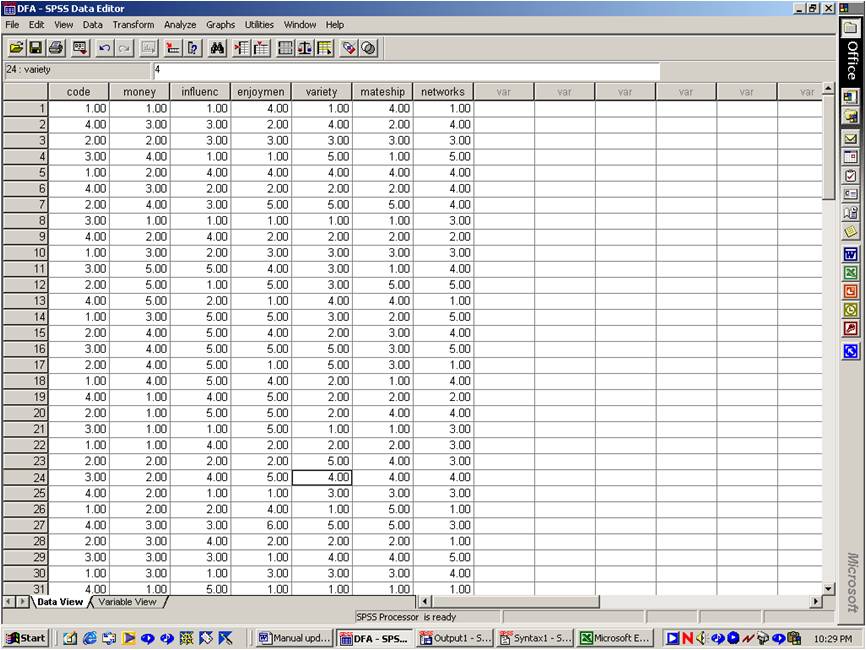 This approach, however, yields two principal drawbacks. The first problem relates to the family-wise Type I error rate. Nevertheless, many procedures could be utilised to circumvent this problem, such as Bonferroni adjustments, MANOVAs, and so forth.

The second problem relates to the interpretation of these outcomes. The table below presents the mean score on every value for each code. Even if all these values differed significantly from one another, interpretations would be clouded. One value is emphasized by AFL players more than other footballers. The next value is emphasized by Rugby League players more than other footballers, and so forth. The pattern that emerges is intricate. Clear, informative interpretations and implications are difficult to reach. Discriminant function analysis is intended to summarise this pattern to derive simple, informative conclusions.

To conduct a discriminant function analysis:

The table below presents the first set of output that needs to be explored. In particular, the researcher merely needs to determine the number of significant p values in the final column. In this instance, 2 of the p values are less than 0.05 and thus significant. This value indicates the football codes vary on 2 distinct facets or dimensions.

To delineate or interpret these facets or dimensions, the structure matrix needs to be explored. The following subsections first present the rationale that underpins this matrix. Another section will delineate the process that needs to be conducted to utilise this matrix.

To appreciate the significance of a structure matrix, the rationale that underlies a discriminant function analysis needs to be understood. In particular, discriminant function analysis combines the various measures into a single column, which is variously called a function, dimension, variate, or linear combination. For example, SPSS might invoke the following formula to create this new column

The table below displays an extract of the data, together with the new column. The following table presents the average score of this function for each football code. In practice, this function does not appear in the SPSS datasheet, but is presented here to facilitate learning. 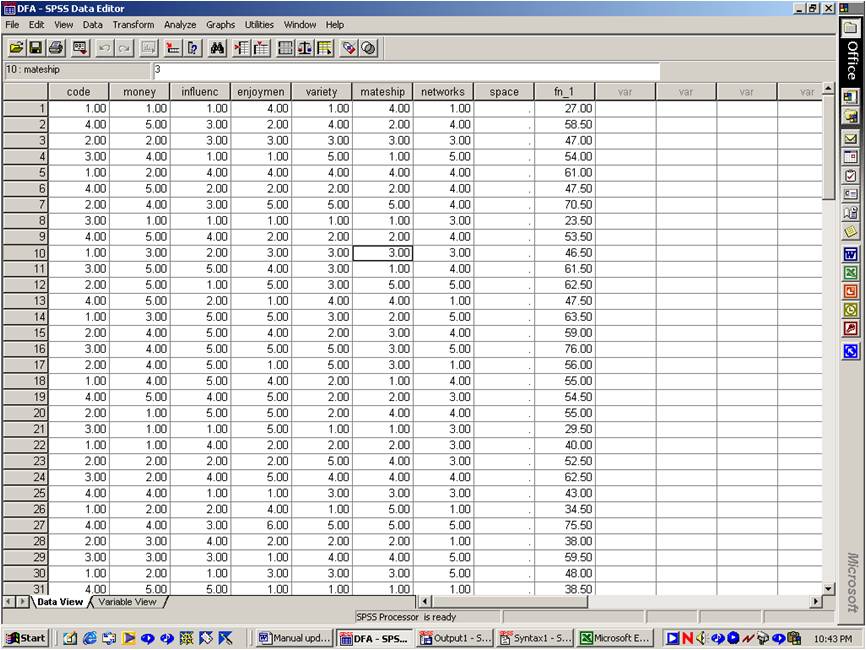 Average of Function 1 in each group

Of course, SPSS does not utilise the same formula on each occasion. Instead, SPSS selects the coefficients--the numbers that precede each variable--carefully. In particular, SPSS selects the coefficients that maximize the difference between the groups. In other words, roughly speaking, any other formula would have generated averages that varied across the football codes to a lesser extent. Strictly speaking, any other formula would have generated a higher Wilks Lambda--which is the variability of these scores within groups divided by the total variability of these scores (see MANOVAs). 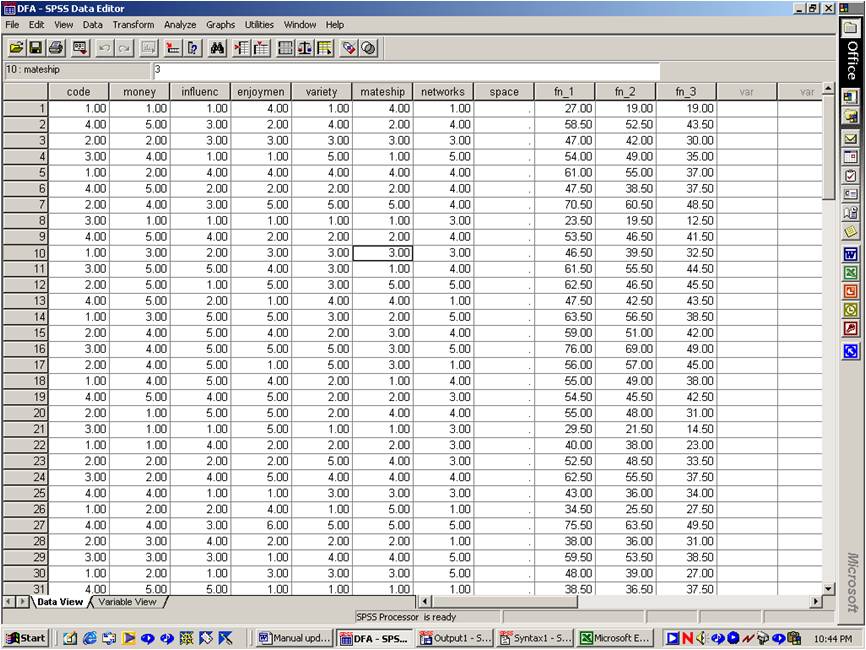 For example, to construct the second new column, SPSS might have utilised the following formula:

Consider the previous table again. Theoretically, you could compute the correlation between each measure and each function. For example, you could compute the correlation between the Money scores and Function 1 scores. A high correlation would obviously suggest that increases in Money responses tend to coincide with increases in Function 1 scores. These correlations, therefore, provide information that researchers can use to define or understand the functions. Indeed, SPSS actually presents the correlations between all the measures and all the functions. The table that presents these correlations is usually called a "structure matrix". A typical structure matrix is provided below. 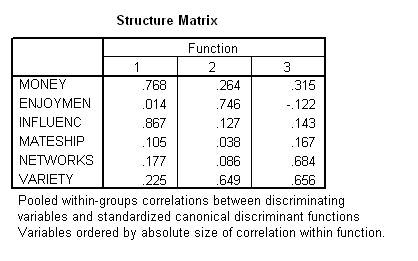 This structure matrix or table can be utilised to interpret the functions or additional columns. In particular, higher correlations, such as values that exceed 0.4 or so, obviously reflect measures that pertain to the corresponding function.

To illustrate, consider a researcher who needs to interpret the first function.

Consider the second function. In this instance,

In most instances, however, the functions cannot be interpreted this readily. Typically, most of the values in this structure matrix are moderate. Hence, the functions cannot be distinguished easily. To overcome this obstacle, researchers can examine the rotated structure matrix instead. This matrix ensures the numbers are either high or low, rather than moderate, which facilitates interpretations.

Sometimes, the results that emerge from Discriminant Function Analyses are unstable. That is, minor adjustments to the responses could have generated vastly different outcomes. Several techniques can be undertaken to assess the stability of these outcomes, such as cross-validation. Perhaps the most straightforward technique is to examine the standardized canonical coefficients, as depicted below. In particular, the sign of these coefficients should match the sign of values displayed in the structure matrix. If, for example, a negative value in this table corresponds to a positive value in the structure matrix, the outcomes may be unstable. Note, however, that SPSS varies the order of variables. For example: 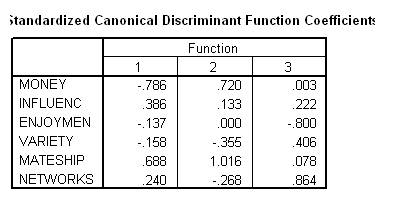 As an aside, to understand the source of these coefficients, recall that several formulas were used to create the functions or additional columns, such as: 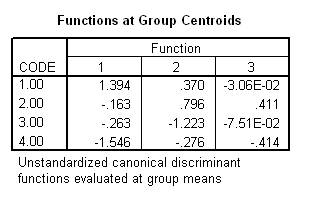 This table reports the average score of every function for each group separately. To illustrate, consider the first function only. In this instance, AFL footballers generated the highest average score on this function and soccer players generated the lowest average score. In addition, the structure matrix revealed that high scores on the first function coincide with high scores on extrinsic values. Accordingly, these findings, taken together, indicate that footballers emphasize extrinsic values to a greater extent than do Rugby players who emphasize extrinsic values to a greater degree than do soccer players. The same process can be applied to the second function.

Step 6: Classification of other individuals

Discriminant function analysis can also provide many other benefits. For example, you can create equations that enable you to predict the group membership of individuals from the measures alone. As an illustration, you could predict whether an individual, who has yet to decide which sport they prefer, is more likely to play AFL than another code from their values. In particular, SPSS can generate the following table. 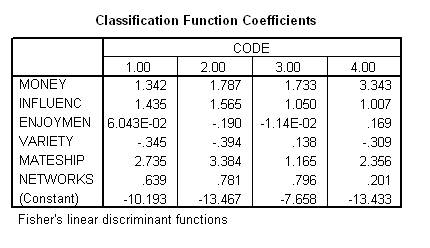 This table provides coefficients that can be utilised to generate a set of equations. Specifically, using these coefficients, the following equations emerge.

To predict the group classification from the measures alone:

Suppose instead that 50% of the sample play AFL, 20% play League, 20% play Union, and 10% play soccer. Suppose these percentages do not reflect the popularity of each sport in the Australian population. Hence, the researcher would prefer SPSS not to bias the classification equations to reflect the percentage of each sport in the sample. That is, the researcher would instead prefer the equations to ensure that 25% of new individuals are likely to be classified in each sport. The option "all groups equals" ensures the equations are unbiased.

Illustration of the format used to report discriminant function analysis

A discriminant function analysis was conducted to uncover the dimensions of values that differentiate four football codes: AFL, soccer, rugby union, and rugby league. The values included the extent to which the individuals perceive money, influence, enjoyment, variety, mateship, and networking as important to their lives. The first and second functions significantly differentiated the groups, Wilks Lambda= .361, Chi square (18) = 59.4, p < 0.001, and Wilks Lambda= .653, Chi square (10) = 24.75, p < 0.01 respectively. The third function did not reach significance.

The structure matrix and group centroids for the first and second function are presented in Tables 1 and 2 respectively. According to the structure matrix, the first function primarily represents money and influence, which can be conceptualised as extrinsic drives. The group centroids suggest this function, and thus extrinsic drives, tend to be most elevated in AFL players and least pronounced in soccer players.

Table 1. Structure matrix that emerged from the discriminant function analysis

Table 2. Group centroids that emerged from the discriminant function analysis

Academic Scholar?
Join our team of writers.
Write a new opinion article,
a new Psyhclopedia article review
or update a current article.
Get recognition for it.