To illustrate, everyone prefers one Wiggle over the others. In addition, although they are difficult to differentiate, everyone prefers one Osborne over the others. Recently, a researcher decided to investigate whether or not the personality profile of individuals is dependent upon their favourite Wiggle or Osborne. Hence, 200 lecturers were asked to specify their favourite Wiggle--Murray, Sam, Anthony, or Jeff--and their favourite Osborne--Ozzy, Kelly, Sharon, and Jack. In addition, they completed the NEO to ascertain their level of extroversion, neuroticism, agreeableness, conscientiousness, and openness to experience. The following table presents an extract of the results. 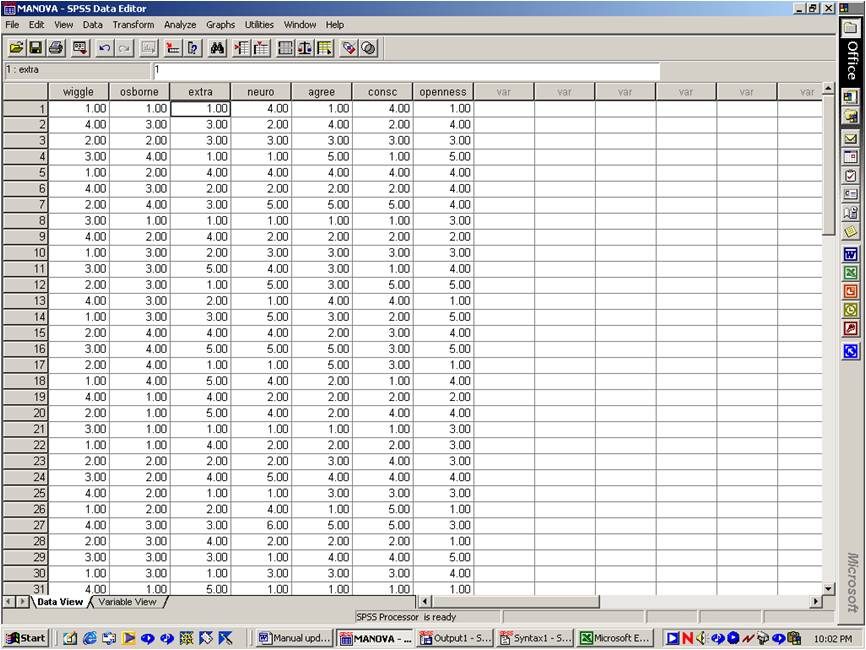 To resolve this vexed issue, the researcher could undertake a series of 2-way ANOVAs, where favourite Wiggle and Osborne represent the two factors or independent variables. In particular:

In short, a series of five ANOVAs would need to be conducted. If any of these ANOVAs yield a Type I error--that is, an erroneous significant outcome--the researcher would conclude that favourite Wiggle or favourite Osborne does indeed coincide with personality. Because the researcher needs to undertake several analyses, the likelihood that one or more of these ANOVAs would yield a Type I error exceeds 0.05. In other words, the likelihood the researcher would erroneously claim that favourite Wiggle or favourite Osborne coincides with personality exceeds the accepted level of 0.05. Of course, this problem can be readily circumvented. In particular,

In contrast, MANOVA somehow combines all of the measures into a single column. This procedure then determines whether or not this single column depends on the factors, in this instance, favourite Wiggle and Osborne. Accordingly, MANOVA does not assess the same hypothesis on many separate occasions and thus circumvents the inflation of Type I errors without the need to adjust the level of alpha from 0.05 to 0.01.

Indeed, MANOVA incorporates another principle to optimise power. Specifically, this technique combines the measures using a formula that somehow maximises the difference between the groups. As a consequence, in some instances, a MANOVA can generate a significant finding even when the corresponding ANOVAs all yield nonsignificant outcomes. Specifically:

To implement a MANOVA when none of the factors are repeated measures, you need to complete the following steps:

To interpret the outcomes, locate a table that is entitled "Multivariate tests". This table is presented below.

The rationale behind MANOVA is complex. This rationale might become more comprehensible after you understand discriminant function analysis. To simplify this discussion, suppose instead the researcher discards favourite Osborne and thus undertakes a one-way MANOVA only. To ascertain the impact of the other factor, favourite Wiggle, SPSS computes an additional column that somehow integrates the five measures. For instance, the following formula might have been utilised to create this additional column:

This column, sometimes called a function, variate, or linear combination, is presented in the table below. In practice, this function does not appear in the SPSS datasheet, but is presented here merely to facilitate learning. In addition, the average of these scores for each group is displayed in the following table. SPSS can essentially subject these data to an ANOVA to ascertain the effect of favourite Wiggle on personality. 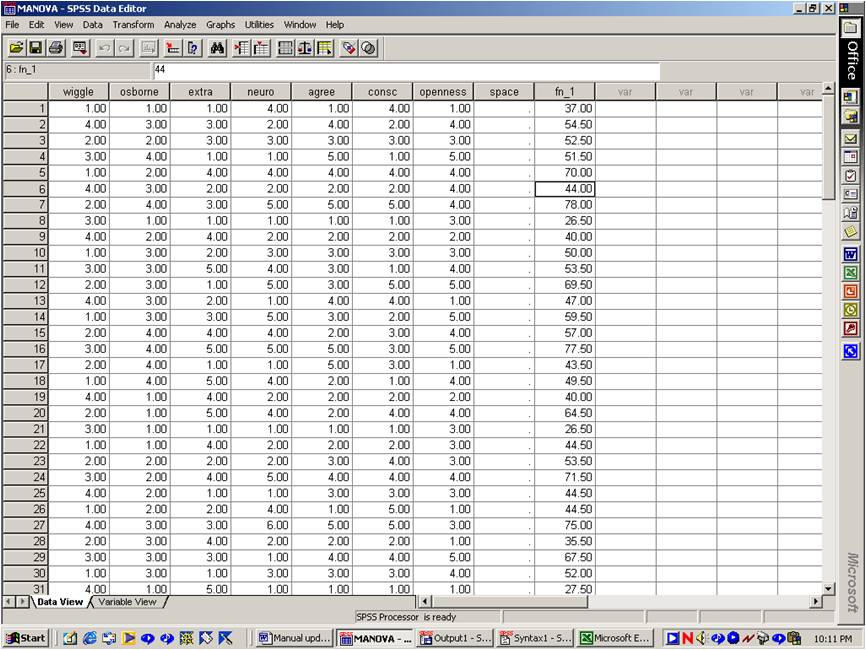 Average of Function 1 in each group

To create the additional column, SPSS needs to uncover the appropriate coefficients, that is, the numbers that precede the variables in the formula. The obvious question, then, is how does SPSS decide which coefficient to utilise. In other words, in this example, how did SPSS decide to utilise the coefficients 2.5, 1.5, 4.0, 5.0, and 4.5. The precise algorithms are complex, but the rationale is straightforward. In particular:

Rationale behind each index

To reiterate, SPSS creates an additional column that integrates the measures and maximises the difference between the groups. Several importance complications need to be recognized, however.

First, SPSS actually computes more than one additional column. In particular, the number of additional columns that SPSS computes equals the number of groups minus 1 or the number of dependent measures, whichever is smaller. Each column is designed to maximize the difference between groups, with one restriction. Specifically, each column must be uncorrelated with the previous columns. For example, in the table below, Functions 1, 2 and 3 are uncorrelated with one another. An understanding of Discriminant Function Analysis would provide a more comprehensive appreciation of these columns.

Another important complication needs to be appreciated. Several definitions can be applied to reflect the difference between the groups. To illustrate, SPSS could calculate:

Indeed, SPSS could compute more complex indices, which are somewhat difficult to understand, such as:

Accordingly, SPSS does not merely ascertain one formula that maximises the difference between groups. Instead, SPSS needs to derive a formula for each possible definition. For example, the formula:

might maximise the variance of all these averages. In contrast, the formula:

might maximize variance of these averages, divided by the variance within groups. In other words, SPSS actually creates many additional formulas to combine the measures. Each formula is intended to maximize the differences between the groups. However, each formula applies a different definition of maximum difference. The following table illustrates the various columns that SPSS creates. In other words, SPSS utilises four of the definitions that were presented earlier.

Using these additional columns, SPSS then computes a Pillais trace, Wilks lambda, Hotellings trace, and Roys LR, utilizing the complex definitions that were presented earlier. Additional formulas have been formulated to convert each index to an F and significance value. In other words, the information that is presented in the table called 'Multivariate tests' really derives from many complex operations.

The previous discussion focussed solely on one-way MANOVAs. An analogous rationale underpins two-way MANOVAs. The principal complication is that SPSS undertakes the process for each main effect and interaction separately. Specifically:

Thus far, the researcher has been able to ascertain whether or not favourite Wiggle or Osborne is related to personality. If none of the main effects or interactions attain significance, the researcher would not proceed any further. They would conclude that no evidence exists that personality varies with favourite Wiggle or Osborne. Additional ANOVAs would be inappropriate, because the likelihood of Type I errors would be inflated beyond 0.05.

If the interaction is significant, however, the researcher would then subject each measure to a separate two-way ANOVA. This process ascertains which of the measures vary with the factors. Most researchers apply a Bonferroni adjustment to these ANOVAs. Nevertheless, you could argue these adjustments are unnecessary, because the ANOVAs do not yield overlapping conclusions. If a main effect is significant, but the interaction is not significant, a series of one-way ANOVAs would be more applicable. In particular:

SPSS actually provides the output of these ANOVAs by default. However, many researchers prefer to undertake the ANOVAs themselves, because they can then dictate the analysis of simple effects and post-hoc tests.

The same fundamental rationale applies if one or more of the factors are repeated measures. The process to conduct repeated-measures MANOVAs, however, is marginally more complex. In other words, if the same participants are assessed in different conditions, a different process must be undertaken. To illustrate this technique, suppose instead that personality of individuals is measured after they watch one hour of each Wiggle. Hence, personality is assessed on four separate occasions. An extract of the data is provided below. The first letter of each variable denotes the Wiggle. For instance, 'm' refers to Murray. The remaining letters of each variable denote the personality measure. For example, 'extra' refers to extraversion. 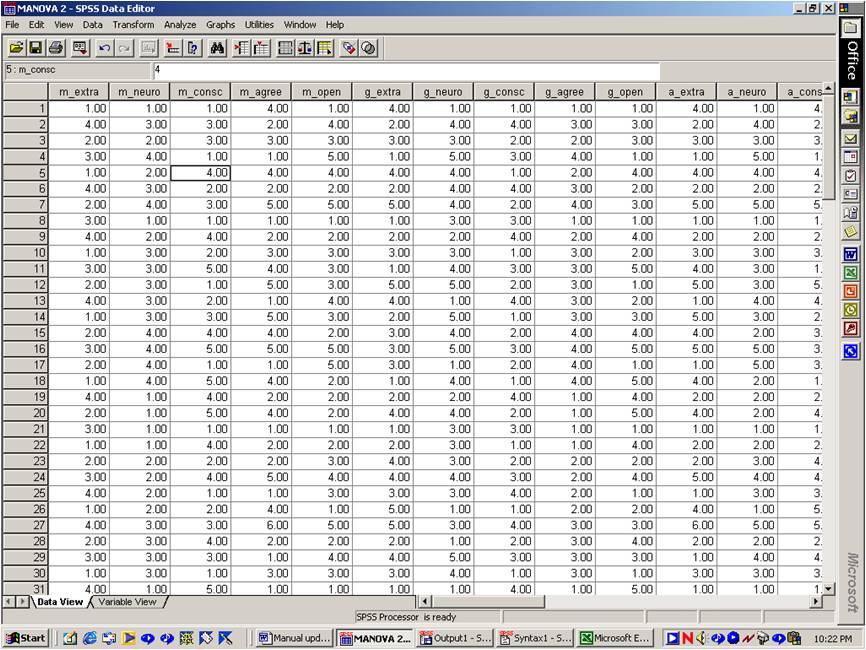 To conduct the repeated-measures MANOVA: 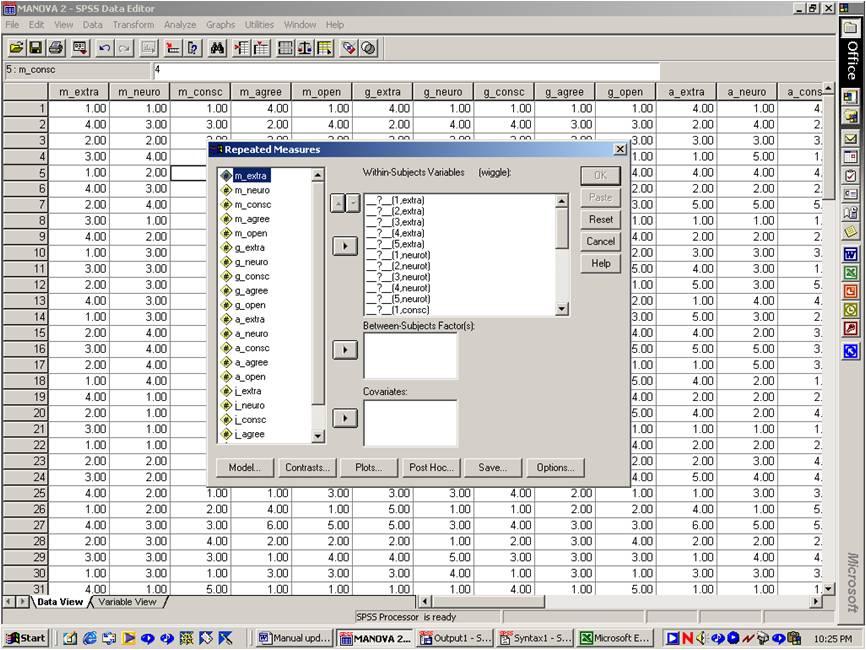 The left hand box displays all the column labels in the SPSS data file. You need to specify the column label that pertains to each question mark in the box labelled 'Within-subjects variables'. For example:

Once you have completed this process, you can also specify other between-subject factors, such as gender. Then press OK. The output should resemble the information that emerges for MANOVAs in which no repeated measures are included.

Illustration of the format used to report MANOVA

Univariate one-way ANOVAs revealed that favourite Wiggle did indeed influence neuroticism, F(1, 132) = 9.56, p < .001 and extraversion, F(1, 132) = 8.76, p < .001, but did not affect the other personality scales. Table 1 presents the mean and standard deviation of neuroticism and extraversion as a function of favourite Wiggle. Finally, pairwise comparisons revealed that..."

Table 1. Mean neuroticism and extraversion as a function of favourite Wiggle. Standard deviations are presented in parentheses.