The insular cortex is a brain region, located between the temporal lobe and parietal lobe, buried within the lateral sulcus. Overall, the insular cortex, sometimes called the insula, is integral to the experience of emotions, the processing of tastes, the memory of procedures, and the control of motor responses as well as interpersonal behavior. Negative emotions in particular, such as disgust (Wicker, Keysers, Plailly, Royet, Gallese, & Rizzolatti, 2003& Wright, He, Shapira, Goodman, & Liu, 2004), seem to activate this region.

Functions of the insular cortex

The insular cortex seems to be intimately involved in decision making, especially when the outcomes are uncertain (e.g., Preuschoff, Quartz, & Bossaerts, 2008). That is, individuals often need to decide which of several alternatives to pursue. Occasionally, some of these options could potentially elicit a host of aversive outcomes. When individuals anticipate the possibility of potential adversities, the insular cortex seems to become especially activated (e.g., Critchley, Mathias, & Dolan, 2001& Smith, Mitchell, Hardin, Jazbec, Fridberg, Blair, & Ernst, 2009). Indeed, anticipation of negative stimuli is regarded as one of the key functions of the insular cortex (e.g., Seymour, Singer, & Dolan, 2007).

Perhaps because of this anticipation of negative events, activation of the insula is correlated with risk aversion (e.g., Kuhnen & Knutzon, 2005& Paulus, Rogalsky, Simmons, Feinstein, & Stein, 2003). Indeed, after lesions of the insular cortex, individuals prefer more risky options in gambling tasks--that is, options in which the outcomes are less certain (Clark, Bechara, Damasio, Aitken, Sahakian, & Robbins, 2008). Presumably, when this region is activated, individuals become more sensitive to adverse possibilities, sometimes called a sensitivity to punishment. Risky alternatives, in which adversities are possible, thus seem less appealing.

The insular cortex also seems to be involved in moral decision making. That is, in many instances, individuals need to decide between two alternatives. One alternative will increase equity. The other alternative will reduce equity but increase the aggregate resources. To illustrate, governments might need to decide whether to fund all schools, which improves equality, or only the schools that perform well, which can encourage performance on average but undermine equality.

As Sanfey, Rilling, Aronson, Nystrom, and Cohen (2003) showed the insular cortex becomes activated in the aftermath of unfair responses. Hence, the insular seems to represent inequity. Furthermore, this activation often translates to rejection of the offer.

To demonstrate, in a study conducted by Stein, Simmons, Feinstein, and Paulhus (2007), a series of positive, neutral, and negative facial expressions were presented. Interestingly, in patients who report elevated levels of anxiety and neuroticism, both the amygdala and insular were especially sensitive to the emotional expressions. Similarly, Wright, Martin, McMullin, Sin, and Rauch (2003) showed that insula activity is elevated in individuals with phobias of small animals.

Furthermore, drugs that alleviate anxiety have been shown to suppress insula activity, as reviewed by Paulus and Stein (2006). An example is lorazepam, a benzodiazepine drug, which can curb panic and other forms of anxiety, but also reduces insula activity (Paulus, Feinstein, Castillo, Simmons, & Stein, 2005). This finding also aligns to the proposition that many anxiety disorders might coincide with elevated activation of the insula.

The insular cortex seems to be involved in awareness of bodily states (see Craig, 2009& see also Karnath, Baier, & Nagele, 2005), and this awareness also modulates physiological responses. For example, the insular seems to be involved in the awareness and sensation of pain (see Baliki, Geha, & Apkarian, 2009). Even imagining pain in the body activates the insula (Ogino, Nemoto, Inui, Saito, Kakigi, & Goto, 2007).

In addition to pain, many other bodily sensations activate the insula, such as warmth (Olausson, Charron, Marchand, Villemure, Strigo, Bushnell, 2005) and stomach distension (Ladabaum, Minoshima, Hasler, Cross, Chey, Owyang, 2001). These responses to bodily sensations can then affect physiological processes, such as regulation of blood pressure, especially during exercise and exertion (see Williamson, McColl, Mathews, Ginsburg, & Mitchell, 1999).

In addition to representing bodily sensations, the insular cortex is also involved in motor control, such as eye movement, swallowing, the cardiac system (Williamson, McColl, Mathews, Ginsburg, & Mitchell, 1999), and speech (Dronkers, 1996). For example, the insular cortex is vital to facilitate the articulation of long, complex sentences (Borovsky, Saygin, Bates, Dronkers, 2007). 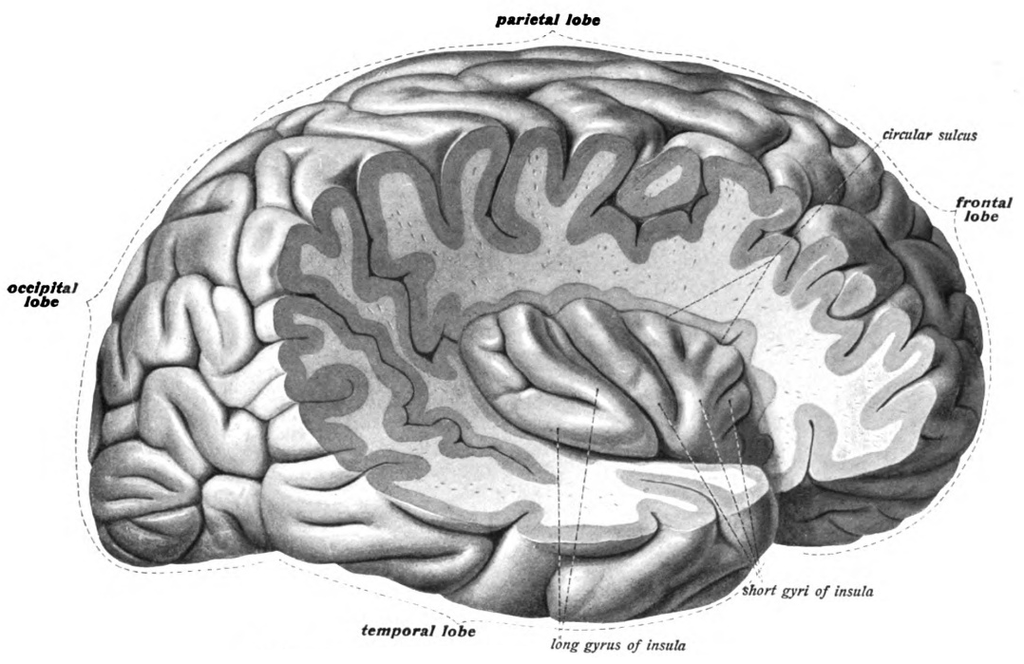 The posterio insular, in contrast, is connected to areas in the primary and secondary sensory cortices. This region also receives input from the ventral posterior inferior in the thalamus via the spine.