Beckwith (2003) previously established MR's agnosia for musical sounds, finding that he was unable to recognise the lyrics and tunes of familiar music, or rhythmically process novel tunes. Some of Beckwith's tests were re-administered and new tests conducted to more fully assess MR's melodic processing for novel tunes.

One such re-test involved Peretz's (2003) melodic tasks, which assessed the integrity of tonal, contour and intervallic processing by systematically manipulating a critical pitch in one melody of a pair (see Figure 2.2). The critical pitch manipulation for the Contour, Interval, and Tonality tasks created contour-violated, contour-preserved but interval-violated, and scale-violated alternate melodies respectively. Each task comprised 30 items requiring a "same" or "different" response.

Consistent with Beckwith's (2003) findings, MR performed below the controls on the Interval and Tonality tasks, but performed within the normal range on the Contour task (see Table 2.2), suggesting preserved contour representation.

The right STG has been implicated in contour processing (Liegeois-Chauvel et al., 1998). MR's lesion encroaches on the STG, thus the finding suggesting preservation of MR's contour processing appears anomalous. Peretz's (2003) discrimination tasks, however, only assessed MR's ability to process contour in basic sequences. Thus, four discrimination tasks designed by Trehub, Bull and Thorpe (1984) were recreated and administered to further interrogate MR's contour processing. With the exception of items from the 'Identical' condition, melodic pairs were subject to the follow manipulations: (1) Transposition, in which the absolute pitch of individual tones was changed but the pitch ratios of successive tones remained intact; (2) Contour-violation, wherein ascending tones became descending tones or vice versa; (3) and Octave-dispersed/contour-preservation, where contour and chroma (note name) were retained but without regard to the octave from which the individual notes were drawn. Randomly chosen pairs from each of the conditions were combined to form a 24-item test. Participants were told to respond 'same' when the contour of the melodies was the same irrespective of transposition or octave change, or 'different' if otherwise. A time limit of seven seconds was imposed. An example of an original melody and all transformed comparisons is depicted in Figure 2.3. 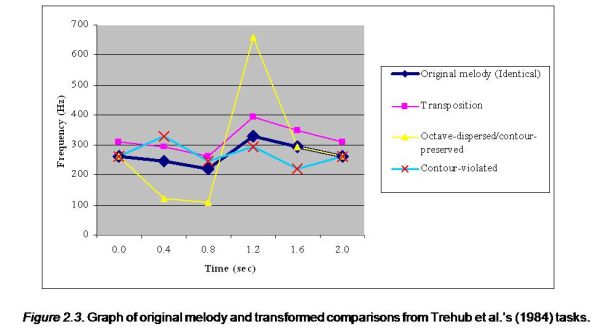 Contrary to MR's normal performance on Peretz's (2003) Contour task, MR failed to discriminate same and different contours in Trehub et al.'s (1984) more subtle Contour- violation and Transposition tasks (z = 3.05, p < 0.01 and z = 4.92, p < 0.001 respectively). This suggests a failure for contour representation. Moreover, MR performed significantly below the controls on the Identical task (z = 4.10, p < 0.001). This result suggests a low-level perceptual deficit, which may have prevented the formation of melodic representations.

As shown in Table 2.4, MR's normal performance on the Octave-dispersed/contour- preserved task was replicated. MR performed significantly below controls on the Linear- transformed/contour-preserved condition (see Table 2.4), indicating that he can reliably represent the contours of novel melodies only when the contour cues are substantial.

In an instrumental sounds task comprising 26 items, MR previously performed within the normal range (Beckwith, 2003). This result is surprising, given his reported experience of confusion when identifying orchestral instruments. Table 2.5 shows the results of a re-test, which now suggests that MR was impaired in identifying individual instruments and the families to which they belong (refer to Appendix F). Although MR's performance has remained stable, the change in statistical outcomes is due to the poorer performance of the previous control group compared with the current group. The current group appears more closely matched for musical background, for example, the 'time spent listening to music' variable, so the more plausible inference is that MR exhibits agnosia for instrumental sounds.