Despite recent criticisms of the modular approach, Peretz has incorporated her modular model of musical functions into the wider domain of auditory cognition. Auditory agnosia is a syndrome that can affect the recognition of all categories of sounds. Disturbances of this type occur in the presence of intact audition and are usually associated with bilateral damage to the auditory cortex (Griffiths, Buchel, Frackowiak, & Patterson, 1998; Zatorre, 1988; Zatorre et al., 1994). Through extensive examination of brain-damaged cases, Peretz has developed a taxonomy that distinguishes between different agnosias on a range of dimensions (Peretz et al., 1994). This model is presented in Figure 1.2. 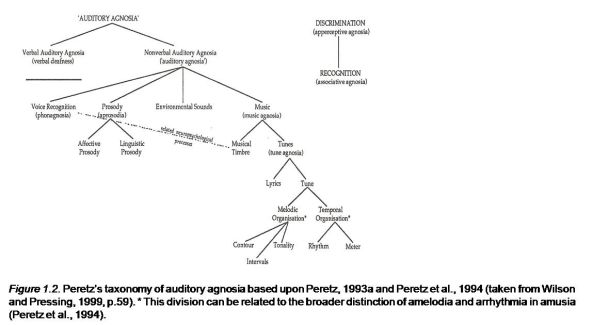 Within the nonverbal domain, numerous cases exhibiting isolated agnosic deficits (see Table 1.1) have led Peretz and colleagues to distinguish between four subtypes of auditory agnosia. These include impaired recognition of environmental sounds, music, speech prosody and voice (as illustrated in Figure 1.2).

Summary of Some Well Documented Cases of Selective Forms of Agnosia

Compelling evidence exists for an agnosia restricted to musical sounds. The cases of CN (Peretz, 1996; Peretz & Kolinsky, 1993), GL (Peretz et al., 1994) and IR (Peretz, Gagnon, & Bouchard, 1998) provide clear examples of selective impairment of music recognition yet preserved recognition of speech and environmental sounds. The rare case of selective preservation of music recognition was exhibited by a left-handed man who sustained a lesion in the right temporal lobes and subsequently could not comprehend language or match environmental sounds to pictures (Mendez, 2001). Peretz has suggested that music agnosia may be further fractionated, arguing for separability between musical instrument recognition and tune recognition. This proposed subdivision is based on a music-agnosic, GL, who was able to recognise the musical timbre carrying a tune that, itself, could not be recognised.

Peretz has argued for a range of separate musical subsystems. Evidence for the dissociability of melodic and temporal organisation is strong (Dennis & Hopyan, 2001). Based on cases of double dissociations, Peretz has included metre and rhythm processing modules as distinct components of temporal organisation (Mavlov, 1980; Peretz & Coltheart, 2003; Piccirilli, Sciarma, & Luzzi, 2000; Wilson, Pressing, & Wales, 2002). While metre refers to the organisation of accents to create a regular beat of characteristic style, rhythm is the grouping of notes of relative durations within the context of metre. Within the melodic dimension, Peretz has proposed three distinct components that can be selectively disrupted, namely contour, intervals and tonality (Ayotte, Peretz, Rousseau, Bard, & Bojanowski, 2000; Peretz, 1990, 1993b; Wilson & Pressing, 1999). Intervals refer to the pitch distance between temporally adjacent notes. Contour analysis abstracts pitch trajectories in terms of pitch direction between adjacent tones, disregarding the precise pitch intervals. Tonal function enables the perception of the harmonic role of notes within a Western musical scale, according to their hierarchy within the scale (Krumhansl, 1990; Trehub, 2003; Trehub, Schellenberg, & Kamenetsky, 1999). As shown in Table 1.2, impaired interval-based processes with spared contour representation is most commonly associated with left hemisphere lesions, whereas lesions in the right hemisphere more commonly disrupt both contour and interval processing (Liegeois-Chauvel et al., 1998; Peretz, 2001c; Peretz, Champod, & Hyde, 2003). Since intervals allow the emergence of scale structures, it is common for impaired intervallic function to coincide with impaired tonality.

Prosody refers to the structured patterns of pitch, duration, and intensity in speech that are essential for conveying emotional information and speech intelligibility. Similarities between linguistic prosody deficits and certain music deficits have been noted for several amusic patients. Language-related prosodic stimuli and their musical counterparts revealed that CN had preserved prosodic and melodic information processing ability, while IR and KB were severely impaired in both areas (Nicholson et al., 2003; Patel, Peretz, Tramo, & Labrecque, 1998). These results suggested common neural mechanisms may underlie the recognition of aspects of music, such as rhythm and melody, and speech prosody.

Assessment of the auditory agnosias involves determining whether the deficit lies primarily at the level of perception or representation. Disorders of perception or acoustical analysis are classified as 'apperceptive agnosias' while disorders of recognition or perceptual matching due to degradation of mental representations are referred to as 'associative agnosias' (Peretz, 1993a). Within each domain of Peretz's taxonomy difficulties with sound perception versus sound representation may apply (see Figure 1.2). According to Peretz's two-stage model of sound recognition (1993a), the first stage of auditory processing is responsible for abstracting the properties of the incoming event (see Figure 1.3). A breakdown at this stage is signaled by a deficit of perception and can lead to apperceptive auditory agnosia. The second stage of processing allows contact to be made between incoming auditory information and newly acquired or stored representations. Failure of this stage leads to associative auditory agnosia.

Peretz has argued that disproportionate impairment of auditory domains indicates associative agnosia (Peretz et al., 1994). As patterns of disproportionate impairment are common, Peretz's cases have typically been classified along the associative dimension. Even in cases of proportionately impaired auditory domains, Peretz has attributed this occurrence to the assembled breakdown of adjacent but separate modules (Peretz et al., 1994). Consequently, apperceptive auditory agnosia has been largely unresearched, leaving a gap in the literature concerning perceptual problems that may underlie associative agnosias.